Now for a change of pace. Yes, it’s book review time, and up on the blocks is Neil Gaiman’s latest offering: Norse Mythology. I have to admit, I was truly excited for this signed copy to arrive, like stalk-the-postman-excited (sorry, Kev). Mythology has always held a special place since I was a child. There were gods and monsters and battles and magic ‒ many-legged beasts and winged deities, muses and fates… so much wonder and woe. It was the playground of my imagination, both glorious and treacherous.

The Norse mythos is also one of my favourites – the gods are fallible, and they make no excuses for who and what they are. Gaiman, too, has used mythos in a lot of his work, American Gods (arguably one of his best) delves deeply into the role of gods both old and new, and those who have read it know exactly who Mr Wednesday is. So it really wasn’t a surprise that Gaiman decided to pen a retelling of the Norse mythos in his own words, expanded upon and tweaked somewhat.

Unlike my other book reviews, there’s no need for a spoiler warning here – this is known ground Gaiman’s covering. Which leads to my next question: why? I thought long and hard about this question, as there’s nothing really in Norse Mythology that you couldn’t find in The Edda. Sure, Gaiman has put his spin on it, but… that’s pretty much all you’re getting.

Look, don’t get me wrong, it’s a beautiful-looking book. That cover is sublime, and the print edition is top quality (gotta love those matt covers) and looks wonderful on my bookshelf – yes, even with just the spine showing. The writing is solid, the storytelling pure Gaiman (along with the humour and wit), but at times it did strike me as rather self-indulgent. Thing is, I’ve read The Edda, and that may be the issue I have with this – the source material is divine.

When I got to the end of Norse Mythology, I wasn’t sure how I felt about it. I didn’t hate it, but I couldn’t say I loved it either. What I did recognise, however, was its use for those who are testing the waters of Norse mythology and wondering whether it’s for them (it is, I’m just sayin’), or even just wondering what the fuss is all about. It’s the perfect introduction to the mythos, to those greater tales – the sagas – that so beautifully bring to life the Norse and their gods and goddesses, their giants and their beasts, of Fenrir and Sleipnir, and Gjallarhorn of Ragnarok.

Perhaps it’s for those who watch the series ‘Vikings’ (which I love), and want greater understanding of the role the gods and goddesses play in that universe. And if it’s a stepping-stone to someone wanting to read The Edda, then I’d say Norse Mythology has done its job.

There’s really not a lot else I can say about it. Was it truly awful? No. Did I enjoy it? Somewhat, I guess. And I think that’s where the real issue lies. There’s nothing… outstanding about it. Someone who has no real knowledge of the Norse mythos may have a different take on it; Norse Mythology is easier reading than The Edda. Maybe that was Gaiman’s idea behind the book, to make it accessible, to entice readers unfamiliar with the sagas to step into that world and explore. Maybe. I don’t know. Like I said, it does come off a little self-indulgent, but that could be just me.

The cover is beautiful though.

On a Goodreads scale I give Norse Mythology three stars. 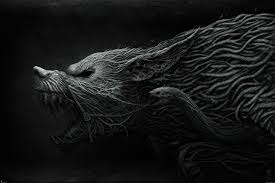 So I’m back from my week away; well rested and slightly sunburned. One of the many things I love about visiting my father’s farm is the amount of time I get to read while the kids race quadbikes around 300-acres of pristine countryside and scaring the crap out of the wildlife.

I powered through Australian author, Greig Beck’s first book in the Valkeryn Chronicles, Return of the Ancients. I’d been sitting on this book awhile; had read about 50 pages but with the amount of work I had on, by the time I got to bed, my eyes refused to focus on any more words. But when I picked up the book and lounged on the back porch in the sun, I couldn’t put it down (hence the sunburn). 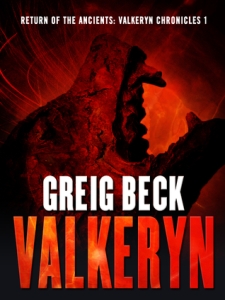 Return of the Ancients is a story about fifteen-year-old Arnold Singer who, while on a school excursion to watch the test firing of a particle accelerator, gets transported to a new world. And what a world it is. The reader is gifted a glimpse into this world via the prologue, and I was very much looking forward to Arn reaching this destination.

Beck’s world is laden with Norse mythology, but don’t go thinking this is the brilliant stuff of Vikings, but rather the descendants of the great Fenrir. (For those unfamiliar with the Norse mythos, Fenrir is the giant wolf born of Loki and the giantess, Angrboda.) Yes, we’re talking a race of Wolfen – warrior-wolves beholden to Odin and fighting for their place in Valhalla.

Pitted against their long-standing foes, the Panterran, and a legion of monsters borne right out of nightmares, an epic battle looms. And in the middle is Arn. You see, this isn’t a new world at all, rather one far into the future in which human’s no longer exist. Arn’s arrival, however, has been foretold. And the portents aren’t good; Ragnarok looms.

Beck’s new world is beautifully and horrifically described, the Wolfen with whom Arn finally finds himself amongst wonderfully fleshed out (as are the enemy). So much so that the death of one Wolfen in particular, hit hard. It’s an honourable death, worthy of Valhalla, but… dammit.

Arn, though enamoured with this new world and the Wolfen, does want to get home. Those at home (or rather those at the lab), are on a quest to get Arn back via the wormhole that now sits open and ready.  Beck moves the reader back and forth between one world and the other, and it soon becomes apparent that not all are looking at this as a rescue mission.

Return of the Ancients is a fast-paced, action-packed story that grips the reader and doesn’t let go. It’s all leading toward the battle-of-battles that will determine the fate of the Wolfen and Valkeryn, and Arn is sent on one last quest by the Wolfen king. But this won’t just be a battle of forces within this world, but the clash of cultures old and new. More ancients are coming, and there’s absolutely no doubt they’re bringing a reckoning.

Beck’s done an amazing job drawing the reader in, and keeping them on tenterhooks before leaving them wanting more. ‘More’ will be arriving in the next couple of days in the form of ‘The Dead Lands’ (The Valkeryn Chronicles #2) via Cohesion Press.

Do yourself a favour, peeps, read this book ­– I can’t recommend it enough.

On a Goodreads scale, I give the Return of the Ancients five stars.