Now for a change of pace. Yes, it’s book review time, and up on the blocks is Neil Gaiman’s latest offering: Norse Mythology. I have to admit, I was truly excited for this signed copy to arrive, like stalk-the-postman-excited (sorry, Kev). Mythology has always held a special place since I was a child. There were gods and monsters and battles and magic ‒ many-legged beasts and winged deities, muses and fates… so much wonder and woe. It was the playground of my imagination, both glorious and treacherous.

The Norse mythos is also one of my favourites – the gods are fallible, and they make no excuses for who and what they are. Gaiman, too, has used mythos in a lot of his work, American Gods (arguably one of his best) delves deeply into the role of gods both old and new, and those who have read it know exactly who Mr Wednesday is. So it really wasn’t a surprise that Gaiman decided to pen a retelling of the Norse mythos in his own words, expanded upon and tweaked somewhat.

Unlike my other book reviews, there’s no need for a spoiler warning here – this is known ground Gaiman’s covering. Which leads to my next question: why? I thought long and hard about this question, as there’s nothing really in Norse Mythology that you couldn’t find in The Edda. Sure, Gaiman has put his spin on it, but… that’s pretty much all you’re getting.

Look, don’t get me wrong, it’s a beautiful-looking book. That cover is sublime, and the print edition is top quality (gotta love those matt covers) and looks wonderful on my bookshelf – yes, even with just the spine showing. The writing is solid, the storytelling pure Gaiman (along with the humour and wit), but at times it did strike me as rather self-indulgent. Thing is, I’ve read The Edda, and that may be the issue I have with this – the source material is divine. 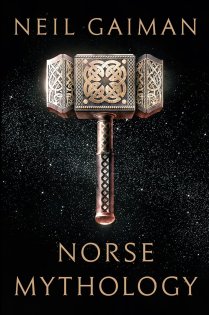 When I got to the end of Norse Mythology, I wasn’t sure how I felt about it. I didn’t hate it, but I couldn’t say I loved it either. What I did recognise, however, was its use for those who are testing the waters of Norse mythology and wondering whether it’s for them (it is, I’m just sayin’), or even just wondering what the fuss is all about. It’s the perfect introduction to the mythos, to those greater tales – the sagas – that so beautifully bring to life the Norse and their gods and goddesses, their giants and their beasts, of Fenrir and Sleipnir, and Gjallarhorn of Ragnarok.

Perhaps it’s for those who watch the series ‘Vikings’ (which I love), and want greater understanding of the role the gods and goddesses play in that universe. And if it’s a stepping-stone to someone wanting to read The Edda, then I’d say Norse Mythology has done its job.

There’s really not a lot else I can say about it. Was it truly awful? No. Did I enjoy it? Somewhat, I guess. And I think that’s where the real issue lies. There’s nothing… outstanding about it. Someone who has no real knowledge of the Norse mythos may have a different take on it; Norse Mythology is easier reading than The Edda. Maybe that was Gaiman’s idea behind the book, to make it accessible, to entice readers unfamiliar with the sagas to step into that world and explore. Maybe. I don’t know. Like I said, it does come off a little self-indulgent, but that could be just me.

The cover is beautiful though.

On a Goodreads scale I give Norse Mythology three stars.