Wow, where to start with this novella? The easiest part: I fucking loved this tale!

I read The Empress of Salt and Fortune by Nghi Vo over three nights, and I was enamoured with it. There is so much to love about it: the divine prose, the evocative imagery, the characters (both current and historical), but most of all, how it resonated with me both during the reading and afterwards.

Someone referred to the book as a ‘gift’, and they’re not wrong. It reminded me of the party game, ‘pass the parcel’ where each layer unwrapped lay a gift, only this time all the gifts were for  me, and there was one on each turn of the page. Each of these a clue to what was coming, taking your mind and imagination to both wonderful and heart-wrenching places. There are lines throughout that will stay with me always.

‘…the war was won by silenced and nameless women.’

It’s a story about war, history, upheaval, friendship, a story about the place (or no place) women have in this world and the strength and courage we all have to forge that path anew. It’s an ode to these strong women, these strong people, who break the bonds that shackle them in the most subtle and powerfully resonant ways.

This is a feminist tale, regaled by the elder, Rabbit (sold by her parents to the palace), to nonbinary monk Chih through a series of vignettes where history is not so much told, but actively learned. Chih and her hoopoe companion, Almost Brilliant, are the living memory of the world, wanderers gathering history before it’s lost amongst the detritus of time. It’s the story of Empress In-yo, forced into marriage for an alliance, then banished after providing the emperor a heir, she refuses to go lightly into that dark night.

It’s not just In-yo’s story, but Rabbit’s as well, and the threads that bind both empress and handmaiden was a joy to uncover as Rabbit slowly peels back the pages of her life and that of the woman who changed it and her forever.

I cannot recommend this book enough, and while it is a novella, I would happily have read an entire novel set in this world. 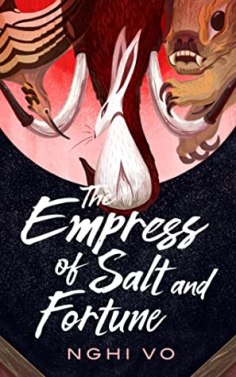 And that cover? Oh, how I love that cover! This is the sort of cover art that has your books forward-facing on the shelves.