Yes, yes, I’m cutting it fine with the Festivus Book Pimping, but remember, as much as I love a print book (oooh, they smell so good!), ebooks are also damn fine presents. So kicking off today’s Festivus pimping is mutli-award-winning New Zealand author, Lee Murray, with her book Into the Mist. 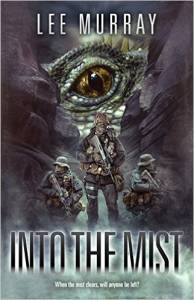 As you can tell from the absolutely kick-arse cover , Into the Mist, is a military horror creature-feature tale, but this one is set in the wilds of New Zealand with a creature ripped straight from Māori legend. It was very cool to read not only Murray’s vivid descriptions of the NZ back-country, but to delve into the culture and rites of a strong and proud people.

Into the Mist (Cohesion Press), follows NZDF Sergeant Taine McKenna and his squad as they escort a group of civilian contractors into the Te Urewera National Park. Not usually a job for the army, McKenna’s other task (off the books) is to find any trace of squad that had vanished while trekking through the National Park.

From the back-cover blurb:

Militant Tūhoe separatists are active in the area, and with its cloying mist and steep ravines, the forest is a treacherous place in winter. Yet nothing has prepared Taine for the true danger that awaits them … a prehistoric creature intent on picking them off one by one.

From the outset, you’re thrust into the action, and the tension Murray weaves throughout the story never lets up. With sub-plots woven perfectly through the tale, the reader is given a glimpse of the rich Māori history, and the struggles to maintain their culture and their land against those intent to profit from it. It’s brutal, it’s gory, and when the chase is on, your gut will be clenching right along with the soldiers and the civilian charges.

And this beastie? Oh, it’s smart, and it’s stealthy, and it’s impervious to the squad’s guns. And shoot it a lot… and you know that only makes the monster mad… and vengeful. Murray is a mistress of tension, and she will make you dance to her tune. I was enamoured with this book, but I grew up on stories of Māori legend via my father (he’s Pākehā, not Māori), so this was a real delight. And it’s wonderful to see diversity in fiction; the world needs more of it.

There’s also a glossary of Māori and local terms for those unfamiliar with the country and its culture, but the way Murray tells the story, understanding is a given.

Read this book you must. Give it as a gift you also must. But I guarantee it will be one you can’t put down. You can read a review of Into the Mist here.

Recommended for lovers of horror, military horror, creature-feature, and balls-to-the-wall fear-mongering. Yeah, this book has it all.

Go, now, Festivus Into the Mist, you won’t be disappointed.