It’s that time of year again, folks, and what better present is there to give someone than books. BOOKS, I TELLS YA! So in the lead up to Christmas, I’ll be pimping books and series that have impressed me, and would make great gifts and stocking stuffers. Support authors!

Now before we go any further, the path to Festivus is a shadowed one. On it you will find only those tales that sit on the darker side of genre fiction. Watch your step.

First off the Festivus ranks is Devin Madson’s amazingly epic The Vengeance Trilogy.  Set within the pseudo-Japanese empire of Kisia, the series is told by Darius Laroth, Hana Otako, and Endymion as they’re embroiled in the fight for the Crimson Throne. While these three tell the story, it is also the tale of Katashi Otako (Hana’s cousin), Malice (Vice Master and Darius’s half-brother), and Emperor Kin – all want different things from the empire, and fight they must. Fight or die.

The first in the series – The Blood of Whisperers – introduces the reader to the players vying for control of Kisia. From the back-cover blurb:

They call him the Usurper. A man of common blood sits upon the throne. By his command the last emperor was executed, but now the empire is on the brink of war. Vengeance is coming. 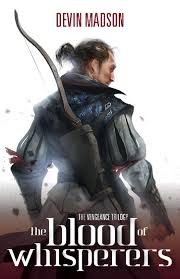 The next in the trilogy is The Gods of Vice. Here, we delve more into the unique magic system Madson has created for this world, and where betrayal and political manoeuvrings mean no one is safe. From the back-cover blurb:

Two emperors. One empire. The war for the Crimson Throne has split Kisia. The storm is coming.

And the final in the trilogy has just been released. The Grave at Storm’s End is a powerful last book in the series, where none of the characters will ever be the same, and as a reader, you won’t either. From the back-cover blurb:

Vengeance has come. Katashi Otako walks with the Vices, burning everything in his path. Now the spirit of Vengeance, he will stop at nothing to destroy Emperor Kin and take the Crimson Throne. When gods fight, empires fall. 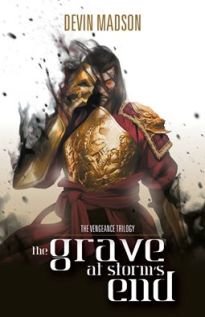 There is no doubt in my mind that Madson is an author to keep an eye on. Her writing is beautifully crafted, and her imagery the stuff of wonder. The Vengeance Trilogy is one of the best fantasy series I’ve read in a really long time, and one that holds pride of place on my bookshelf. Oh, and those covers are just gorgeous.

All of the books are available from Madson’s website, and come perfectly wrapped for Christmas. You can’t go wrong as a gift.

Recommended for readers of fantasy, dark fantasy, epic fantasy, political intrigue, and characters that will stay with you long after you’ve closed the book.