Ah, it’s review time again! Evan Winter‘s African (Xhosa) inspired epic fantasy  The Rage of Dragons (The Burning, Book #1) is a story I wish I’d dived into sooner as I am in love with this book and its characters. If you haven’t added this to your TBR mountain, then rectify this immediately!

In keeping with the short reviews (because time and I are still at loggerheads), I’m not going to go into a huge, in-depth breakdown of character and worldbuilding and plot — others do that far better than me, but know that the characters reach into your chest and do both terrible and wonderful things to your heart, that the worldbuilding is unique and beautiful and terrifying, and that the plot arcs with a deft hand through the story.

The journey with Tau is a fraught one, and you can’t help but want him to reach his end goals despite knowing it likely isn’t going to end the way you’d want it to. The secondary characters, particularly Tau’s Scale, are diversely unique, with their own quirks and their own secrets, their own desires too, and the influence they have on Tau and he on them, the building of friendships that start unwanted was a joy to read.

The political ideology of the world, the caste system that’s one of oppression with a baited hook of betterment strung with a poisoned worm hits hard, and continues to hit ever harder as Tau starts to really understand what’s at play and what those in power will do to maintain their hold of it. The ‘Rage’ is real, folks, I felt it through them, for them. 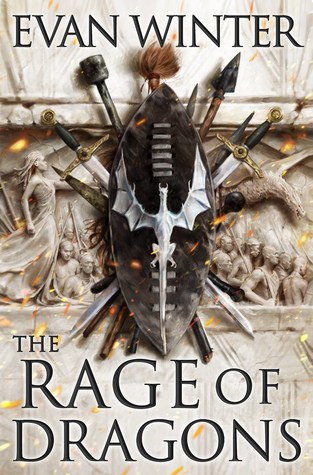 The magic system, holy shit, the magic system. There’s some terrifying shit in the Isihogo, and Winter’s descriptions of the demons within and the destruction they wrought on bodies was top notch. As were all the battle scenes/skirmishes — I love me a good fight scene, and Winter knows how to write them, to give them the speed and believability, the horror of it.

I flew through the last third of this book, reading way past the witching hour — this book is a sleep-thief, and I gladly let it do so. Thing is, I NEED the next instalment because goddamn, that ending… How Aran would have been proud. Hit me right in the feels.

I can’t recommend this enough, and I give it all the stars!

Bring on book two: The Fires of Vengeance. I am so here for it.