Well it’s the first of the month here (those of you in the northern hemisphere will catch up soon enough), and I’ll be leading August off with a review. Yes, it’s review time!

Today (tonight) it’s Australian author, Donna Maree Hanson, and her book Shatterwing – book one of her Dragon Wine series. I met Donna at Sydney Supanova when I was trawling for books. Now the only thing better than books, is signed books; as an author, I know there’s not much better than having someone ask to sign the book you wrote – so it was a win-win on both sides of the table.

It was great to have a chat about the books, too, as I really had only a vague idea about their content, although the cover does point you in the general direction. 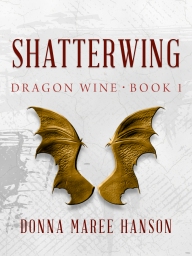 Now before I move on, it’s requisite spoiler-alert time:

THE SHIFTING OF AIR UNDER WING WARNS OF INCOMING SPOILERS. RUN. NOW. LEST YOU BE BURNED BY THE RUINATION THAT IS THE SPOILER.

Okay, so yes, from the cover, Shatterwing is a book with dragons, but dragons form only part of this story. At its essence, this is a story about a world on the brink and how society (or what’s left of it), deals with an apocalyptic world – not well, I have to say. The white cover and golden wings are a great juxtaposition for a tale that firmly sits on the grim-dark side of things.

The book is divided into two parts, and in the first we’re introduced to the major players: Salinda, Brill, Danton and the Inspector. The Inspector runs the winery, which is more prison than lush vineyard, and from the beginning the reader is left in little doubt the Inspector is a cruel, sadistic son-of-a-bitch.  The scenes underground with both Brill and Salinda are brutal – not at all for the faint-hearted, you’ve been warned.

The vineyard is where they make Dragon Wine, which is vital to those of Margra for not only its healing powers, but as a source of currency and political power.

The story is told mostly from Salinda and Brill’s point of view, but even so, I found it difficult to connect with either of them. It wasn’t until under-dweller, Nils, is introduced that I felt that connection. I slowly warmed to Brill and Danton (Danton especially), and it took longer to really connect with Salinda, which was a shame as she’s quite vital to the story.

Now there are dragons, but they are creatures to be feared, especially by those working the vineyard. Run and hide or become a meal. All but one dragon – Plu – a fledgling Salinda briefly raised and to whom she can call on when needed.

Shatterwing, however, isn’t a dragon as I’d first thought, but one of the moons that orbits Margra. Only Shatterwing is a fragmented moon, and those fragments are continually falling to the earth. There’s a lot going on with this world, and Hanson does a great job of drip-feeding the world and its culture through her storytelling rather than the laborious info-dumps I’ve found in other books (authors take note!).

It’s a slow piecing together of what’s happened to bring the world to the brink, and how the different cultures within this world interact and try to survive – some for purely selfish reasons, and others for the good of all. And I have to say, there isn’t a lot of good in this world.

There are those, however, who have magic. Salinda is one, although she doesn’t quite know its power or how to harness it. The ‘cadre’ (a collection of memories and untapped power) was passed to her via her mentor. Another with power we discover in the second part of this book.

Here, we’re introduced to Thurdon (rather briefly), and to his apprentice, Laidan. Thurdon has the cadre, which he passes to Laidan before his death. Of course she has no idea what’s happened or what it is that she now possesses. Held prisoner by the fratricidal prince, Lenk, she has a rather fortuitous rescue from a childhood friend, Garan who has the cool job-moniker of ‘Skywatcher’ (note: this is the title of book 2 in the series).

Fortuitous might be the wrong word, as things really don’t go well for the pair. At all. This really is a fucked-up world, and that Hanson doesn’t shy from the brutality humanity can bestow on one another is to be commended.

This is a desperate world made up of desperate people, which makes the journey of Salinda, Brill, Danton, Laidan and Garan all the more treacherous and desperate. It’s Nils, though, who sees the world and its people for whom and what they truly are – he’s almost the conscience of Margra. It’s to him, though, I believe the fate of this world rests.

I liked this book, and it was an easy read as well. I would have liked to have found that connection with the characters a lot sooner, and I think a lot of that has to do with being unable to find something within each of them that resonated with me. It came, just later than I wanted.

I’m looking forward to reading the second instalment, as the book really did pick up the pace from about the halfway mark. I’m invested now, and that’s all a reader (and writer) wants.

I’ll repeat my warning here that this isn’t a high-fantasy book about dragons, but rather a grimdark, brutal fantasy that delves right into the depths of inhumanity. For me, it’s these types of books that show humanity at its best. Small band though they may be.

On a Goodreads scale, I give Shatterwing 3.5 stars.