How did you spend your Friday night? I spent mine being lurched at by zombies and chased by clowns. S’true. My buddy Jason and I were crazy enough to take on Running Scared, an 8km horror-based obstacle course. That’s right, 8kms. At night.

The course was set up at the Sydney International Regatta Centre at Penrith, and trust me when I say the foot of the Blue Mountains is cold once the sun goes down, but Jase and I were ready to get our run on. Mustered around the start line were zombies shuffling about competitors, a bunch of dancing zombies (yep, it was Thriller time), and all interspersed with some iconic horror stars: Freddie Kruger, Jason Voorhees, and Pennywise, to name a few.

After registering and signing two waivers (that kinda gave me pause), we were given a race number, headlamps, and directed toward the start line. At 8pm we began, first tackling a maze. I’d have to say, that was probably one of the best parts of the ‘run’. We made our way from freaky room to freaky room: a bathroom reminiscent of SAW, another that had overtones of Deliverance, and a harlequin room whose strobe lights messed with my head, but once through, it was time to run.

Now, 8kms isn’t that far really, especially on a straight course with flat ground, but that wasn’t what we faced. Scaling a pyramid of haybales (much higher than it sounds) started us off before it was time to drag ourselves across a river via a line of life-buoys (dignity and elegance be damned). We were wet now, and we were cold. It was also where I discovered the tights I’d worn weren’t really conducive to running when wet. Ah, well, it was only water.

Did I mention it was cold? But on we jogged. Now, I understand the idea of the run was to introduce a fear factor, but neither Jason nor I quite got that. At one stage, we were chatting as we walked (I can’t run 8kms non-stop, sue me) and we were suddenly distracted by two camera flashes to our left. Immediately to our right, a chorus of groans rose from a pile of zombies hidden near the track. We paused a moment then continued our chat, much to their disappointment.

Our next obstacle… well, it was more super-slide. “Keep your feet up,” one man told us. Confused, Jase and I began to slowly walk down the plastic wondering about the warning when our feet went out beneath us and in almost perfect synchronicity we fell backwards and slammed our heads against the ground. Head-lamps went flying as we sped down the hill and into a nasty looking pit of sludge. Feet up!

It was gelatine-based slime and it sucked at your sneakers as you tried to walk out of it. You couldn’t shake it free. It clung to us in all the wrong places and it felt like we’d shit our pants. We commando-crawled back up the hill (and we were filthy) before tackling our next obstacle. We had to traverse rope netting suspended between two shipping containers. Best way? Barrel-roll. Now, I don’t know what went wrong but I somehow managed to hurt my nose; on the plus side, Jason said it showed him how not to do it. Laugh we did, long and loud.

And on we ran. It was dark, the only light we had was from our headlamps. Zombies lurched from copses of trees, clowns jumped out as us, but the fear was more from what the next step would feel like in our crappy-pants than what went bump (or groan or scream) in the night.

Now, we could hear the squeals of others as they were surprised and scared, but it never really got to either of us. Were we inured to it because we’re horror writers? Nah. I think it was more exhaustion that got to me, and we really could see them coming. The obstacles did test your co-ordination and staying ability, and the 8kms (in those pants) felt like 80kms.

We waded through more slime, crawled under blood-covered obstacles and manoeuvred through a twisting canal filled with tyres. It was here that a zombie grabbed my ankle. Normally, this would have made me jump, but I was cold and tired and too busy laughing at our ungainliness.

Overall, we had a great time and a great laugh. Not quite the fear factor we’d imagined, but that doesn’t matter. The amount of effort and attention to detail put into the event by the organisers was brilliant. The actors did an amazing job portraying their characters, and the general vibe of the whole thing was fantastic. I had a blast, and I know Jason did too.

My Friday night was awesome. How was yours? 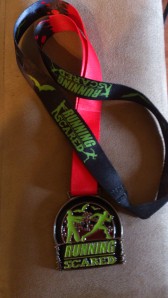